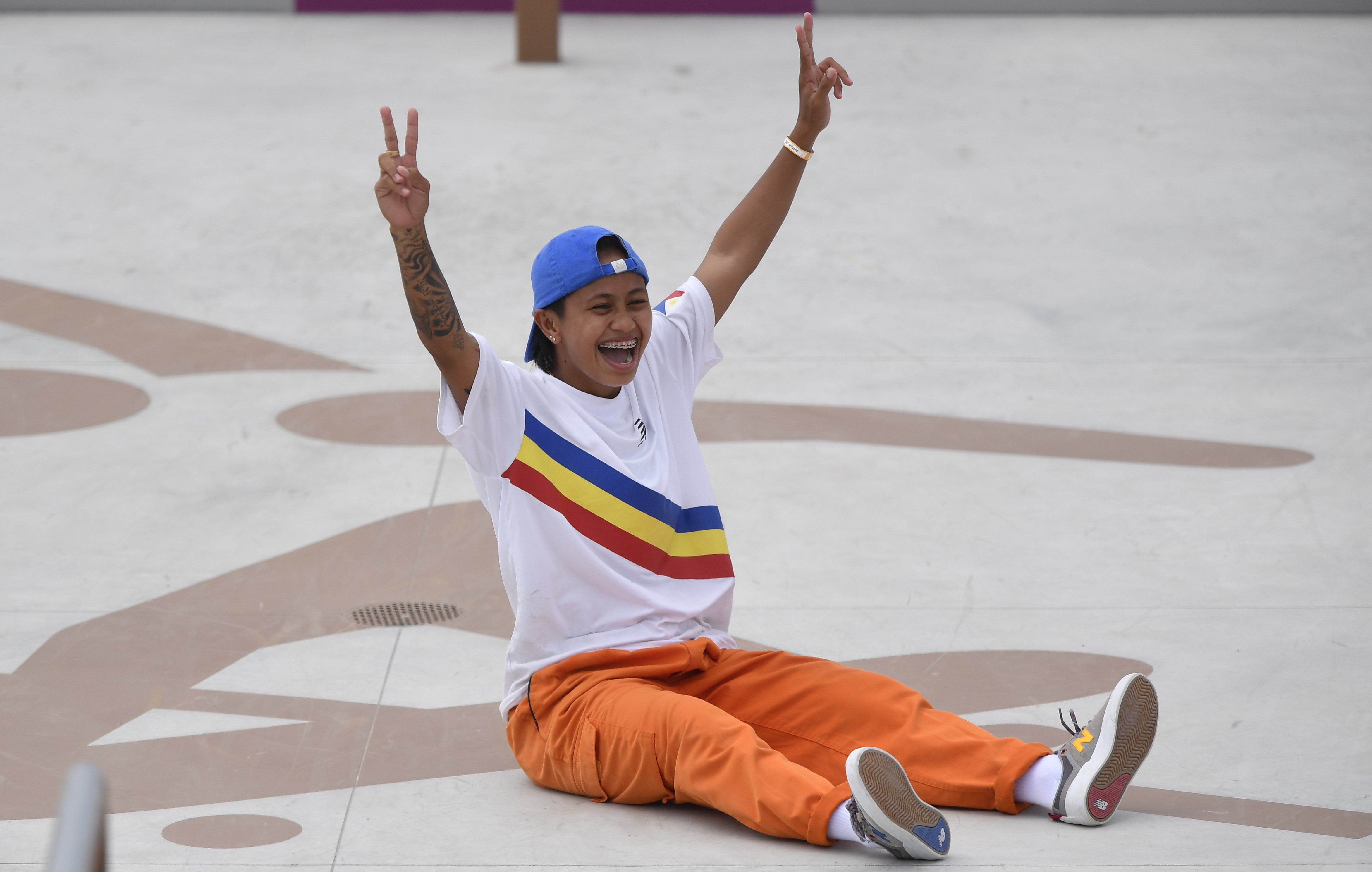 Exhausting in a good way.

The 22-year-old skateboarder is like the Looney Tunes’ Tasmanian Devil. But after 200 cups of coffee and 50 boxes of caramel-filled donuts. She just never gets tired. She’s like on an eternal sugar rush. Her—what’s another word for passion?—for life has always been her driving force to achieve heights that seemed unreachable for her five-flat height when she was still a kid in the bustling town of Lahug in Cebu City.

After all, looking at her, no one would think that she’s a world-class athlete. She’s small, she’s lean, she’s, um, normal. She perhaps didn’t turn heads walking around the Athletes’ Village in the Tokyo Olympics. What’s this little girl doing here? Looking all smug and swag as if she is something.

Here’s the thing though: She is something.

And her valiant performance in the finals of the street skateboarding in the Summer Games only validated her place among the sport’s elite. Not that it needed any. But many Filipinos maybe aren’t still familiar with the 22-year-old Didal, especially those who still scoff at skateboarders, dismissing them as dirty, rebellious, and hard-headed, instead of acknowledging their talent, athleticism, and derring-do.

“She’s an amazing skater. She’s kind of a generational talent. There are no international-level skate parks in the Philippines, so she has to go and train (abroad). She’s really a great skater (despite the handicap). She’s naturally gifted,” said Didal’s manager Anthony Claravall.

Didal has been wishing—pleading—for more skate parks to be installed in the Philippines. Never mind that they’re not international level. Just skate parks, period. Just a place for aspiring skateboarders to hone their skills. Or even just to have fun like her.

Even in her maiden stint in the X Games in Minneapolis in July 2018, Didal, the first Filipino to compete in the prestigious event, already looked comfortable. It was as if she’s been friends with her other more heralded competitors since grade school. She would video bomb their interviews, tickle them, and jump on their backs.

Rookie jitters, however, probably got the best of Didal when the contest began. She advanced to the finals but didn’t win a medal. But perhaps, watching the world’s best on the podium made her visualize what she needed to do to get to their level.

A month later, she ruled the Asian Games in Indonesia, becoming the first female winner in the biennial meet. Not surprisingly, she also became the crowd darling.

Then a few more months later, Didal was included in Time Magazine’s 25 Most Influential Teens for helping “cement skateboarding’s status as a serious sport.” It has become her advocacy, along with rebelling against gender bias.

After her stints in the X Games and the Asian Games, Didal used her rising popularity to urge the government to build more skate parks to help develop more Filipino skateboarders.

Last Monday, she was her usual boisterous self at the Ariake Urban Sports Park. She was up to her familiar theatrics, gleefully gyrating, playing for the cameras, fooling around with her competitors. She’s like a human TikTok video.

Come grind time, Didal—wearing a blue cap backward, loud orange pants, and a loose white shirt with three stripes with the colors of the Philippine flag—had a rousing start, easily advancing to the medal round. She, however, faltered in the end as she failed to land her tricks a couple of times, crashing on the ground. But maybe, the real ending to her tricks was her wide smile and thumbs up after every fall, which the Tokyo Olympics Twitter account stamped as the “Margielyn Didal seal of approval.”

“She likes to be in the moment. You just let her set the environment, you let her go, and she does what she does,” said Claravall.

Didal ended up in seventh place among the eight finalists, missing the historic opportunity to become the first gold medalist in skateboarding in the quadrennial event. While it surely didn’t seem like it, Didal revealed she wasn’t 100% during the competition.

Didal admitted her finish was a bit disappointing, but she easily brushed it off like crumbs on her lap.

“I just enjoy the moment. I’m here to cheer for everyone,” said Didal. “I’m still me. I tried. Whatever the result is, I’m just happy to be here.”

To some, her remarks may sound like a lack of dedication. Too relaxed. Too complacent. Too feeble. After all, it’s the grandest stage in sports. Most athletes have dedicated their lives to get to this point. But while that’s surely laudable, there’s also something crazy beautiful about Didal’s free-spirited, almost cartoonish approach.

“If I think too much about it (winning), dun ako kinakabahan. Kaya sinasayaw ko na lang para mahulog ‘yung kaba,” said Didal with a laugh.

Didal has indeed come a long way from learning her first trick after seeing skateboarders beside her mom’s kwek-kwek stall. She’s never been on an airplane before she was discovered in 2016 by Claravall, who got a tip from his friend about a tiny yet talented teenager the size of about three skateboards. Now, she’s been all over, including the United States, England, and Brazil among others.

On late Wednesday afternoon, the whirling dervish that is Didal was back in the Philippines. She was in a wheelchair due to her ankle injury, which she said isn’t too serious. As always, she was happy to be there. Still grinning and beaming with delight despite her limited mobility and coming off a five-hour trip, including a flight delay.

Her arrival had less fanfare because of one of her flight companions: Hidilyn Diaz. She needs no other descriptions. The situation mirrored what happened two days ago. Didal’s charming of the Tokyo Olympics was the big story until it got overshadowed by the historic victory of Diaz.

But not that it matters to Didal. Her? Of all people? Besides, she’s now re-focusing her endless energy on a familiar cause. When asked if she can win in the 2024 Paris Olympics, she only needed a few words: “Depende kung may skate park.”