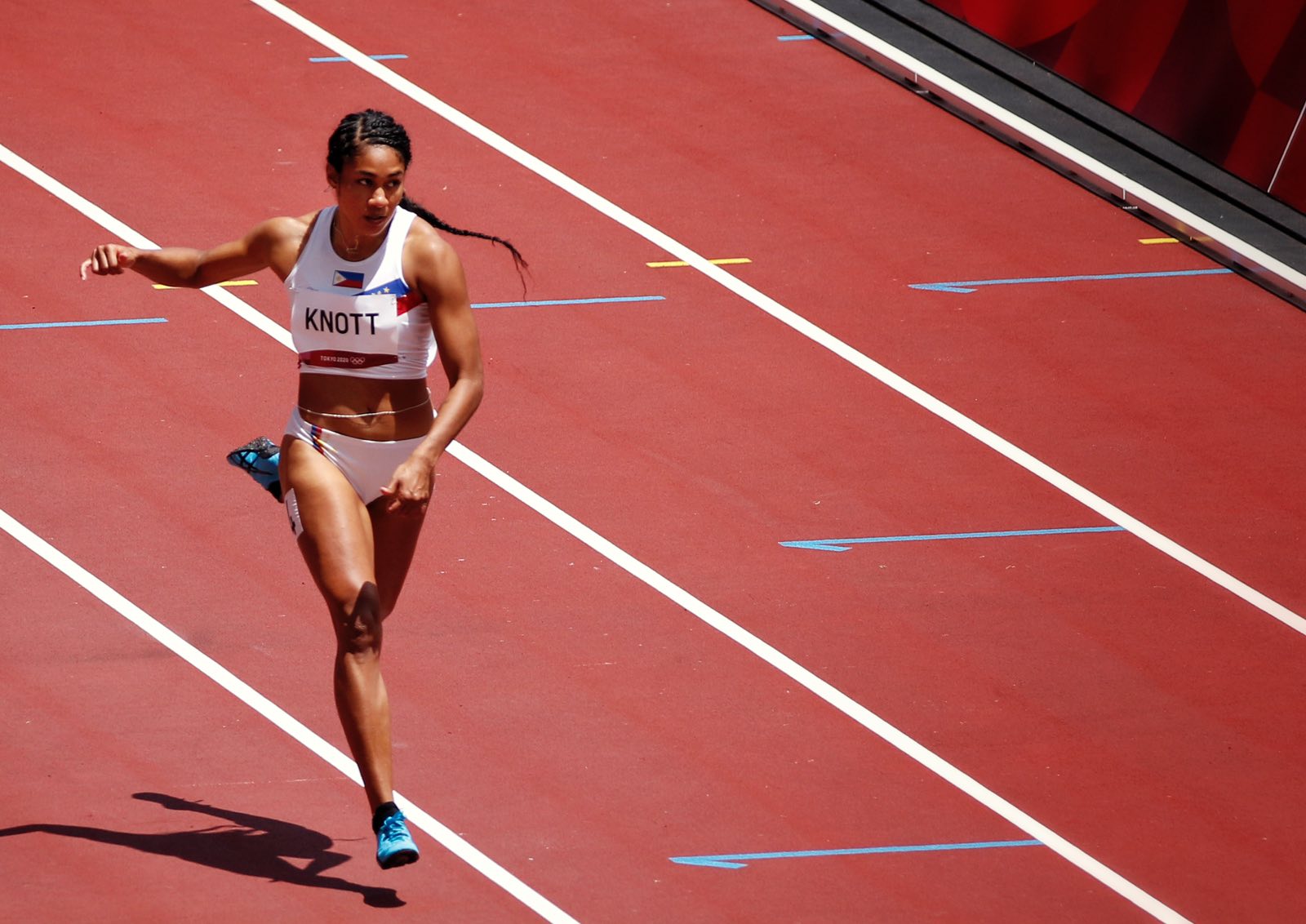 (August 2, 2021) – Filipina sprinter Kristina Knott entered the 200-meter event of the Tokyo Olympics as prepared as she can be, training towards her peak performance while scouting her competitors well.

Knott, however, might have underestimated one particular factor: The heat condition in Tokyo.

“I was feeling good during the warm-ups, but I guess the heat kind of took over from there,” said Knott, who had to be carted away in a wheelchair after succumbing to the heat after her race. “I didn’t feel good the last 40 meters. I think you can tell if you watched the race.”

The Orlando-born runner registered a time of 23.80 seconds to finish last in heat 7 of the qualifying races, as she failed to advance to the semifinals. She also fell short of her goal of clocking in under 23 seconds, which would have broken her own national record of 23.01 seconds.

Already expecting an uphill climb in a competition filled with the world’s best sprinters, the heat, which reportedly hit 32 degrees, added another layer of challenge for the two-time Southeast Asian gold medalist.

“I was throwing up, but I always do that. But it was just a mixture of me throwing up and just feeling extra weak. I’ve never felt this weak before. The heat is just extra real out here,” said Knott, who tested positive for COVID-19 a few days before the Tokyo Olympics.

Japan’s heat has been taking a toll on the quadrennial event, making it even more difficult for the athletes who are already dealing with the strict health protocols to compete at the highest level.

There have been instances in the last few days where some athletes were forced to withdraw because of the heat. In archery, Svetlana Gomboeva of the Russian Olympic Committee fainted due to exhaustion, while in tennis,  Paula Badosa of Spain left the court in a wheelchair after suffering a heatstroke.

But despite the unfortunate outcome, the 25-year-old Knott is still looking forward to representing the country in future competitions, as she hopes that the experience in the Tokyo Olympics would ultimately make her a better sprinter.

“Whenever you get your butt whooped, you kind of take things into consideration. It was definitely a learning experience,” said Knott. “I’m grateful to have been here to represent the Philippines, but this is just the beginning for sure.”

Still at her prime, Knott will surely continue being the country’s premier sprinter in the coming years, as she now shifts her focus on the 2024 Paris Olympics, with redemption clearly in her mind.

“For sure, we’ll be in Paris. I’m just gonna have to go back to the drawing board with my coach,” said Knott. (PM)