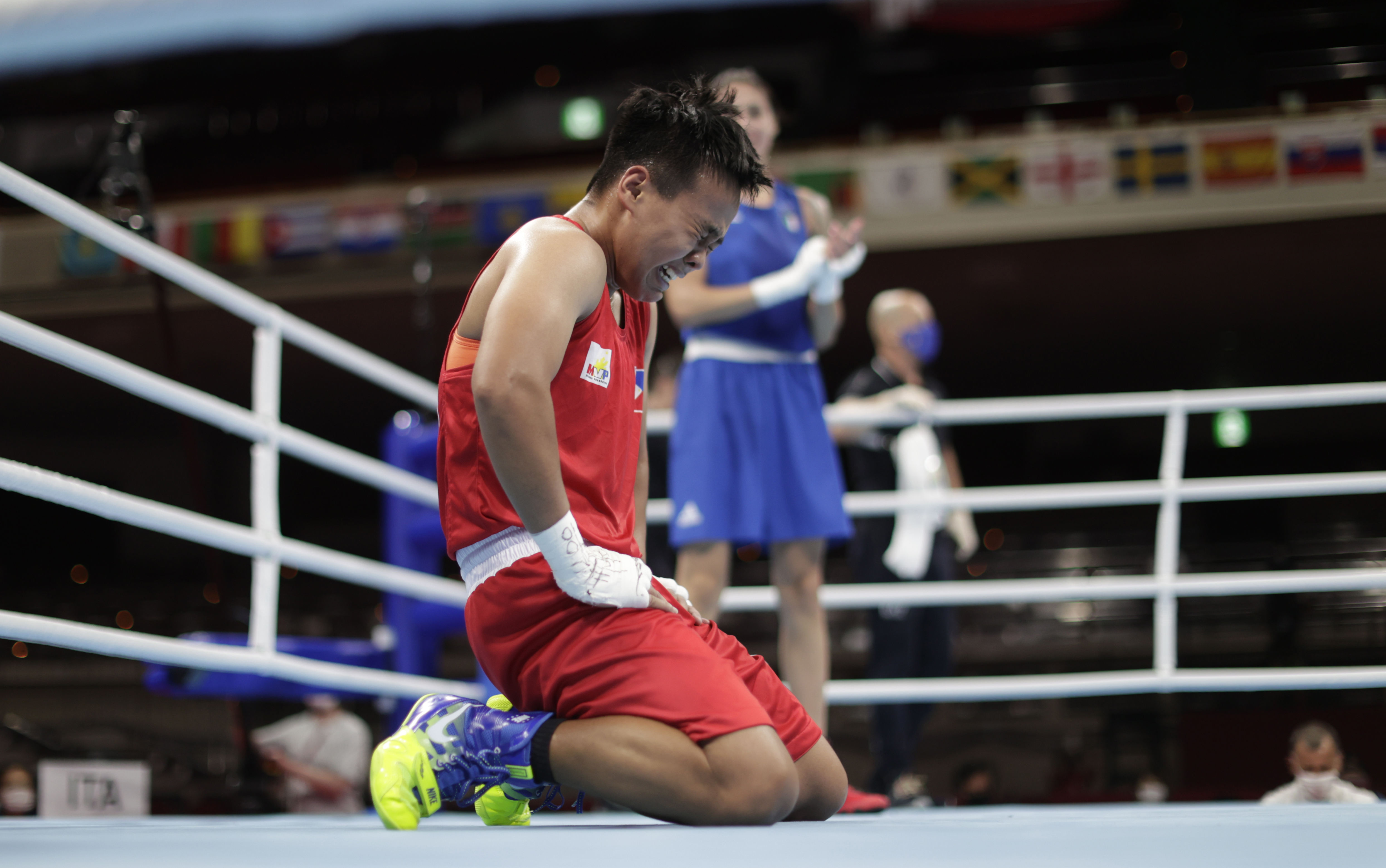 The pride of Davao del Sur, who two days ago secured a sure bronze medal, will be fighting for the golden prize on Tuesday in the featherweight category after beating Irma Testa of Italy in their semifinal faceoff earlier today.

Petecio’s win assures her of at least a silver medal—not bad at all for someone who previously thought about walking away.

She was in a familiar situation in the 2018 Asian Games: Fighting in the semifinals with a chance to advance to the gold medal round. The cheerful fighter, however, could not get the job done, losing via split decision to Yin Jun Hua of China. The loss, like any, was heartbreaking. But its controversial nature made it a bitter pill to swallow.

Petecio was the aggressor throughout the bout, peppering Yin with punches in bunches from the opening bell right to the very end. Almost every time, the highly touted boxer from China would turn her back to stop the hard-charging Filipina in her tracks.

Two judges saw the fight rightfully in Petecio’s favor, with one scoring the fight 29-27 and the other scoring it 30-26. The other three judges, however, seemed to have been watching a different fight, picking Yin, who was backpedaling for most of the fight.

The loss hurt so much, Petecio nearly hung up her gloves. It was simply one too many heartbreaks, even for someone as iron-willed as her. She also settled for the silver medal in the Southeast Asian Games thrice.

But Petecio decided against quitting, maybe because, well, there’s a saying about quitters: They never win.

Since then, Petecio has mostly won, including a world title in 2019. Now, she’s just three rounds away from snagging the country’s second gold medal in the Summer Games.

Indeed, her career isn’t over—not by a mile.

But of course, what is sweet victory without some adversity?

Petecio dropped round 1 in all judges’ scorecards, looking out of sorts against the tall, rangy Irma, who at one point placed her left hand on Petecio’s forehead, seemingly mocking the shorter Filipina and daring her to charge inside.

Down a round, Petecio switched to plan B starting in round 2: Stalk the two-time Olympian and unleash once Irma is within punching range. The new strategy worked to perfection, with Petecio charging hard and landing telling blows to the Italian’s head and body. She continued to do the same in the final round, and her controlled aggression left no doubt as to who would advance to the gold medal match.

With her skill, grit, and resolve, the first-time Olympian had that look: She wasn’t going to be denied.

The Tokyo Olympics has been one glorious redemption tour for Petecio, who would not have been here if she let adversity and heartbreak consume her in 2018. All that’s left is to cap it off with a glittering gold medal.

She will get her chance on Tuesday against either Karris Artingstall of Great Britain or Sena Irie of Japan, who upset Petecio in the Asia/Oceania Olympic Qualifiers in March last year.

Either way, expect Petecio to face the daunting task. Expect her to fight through it too. (PM)