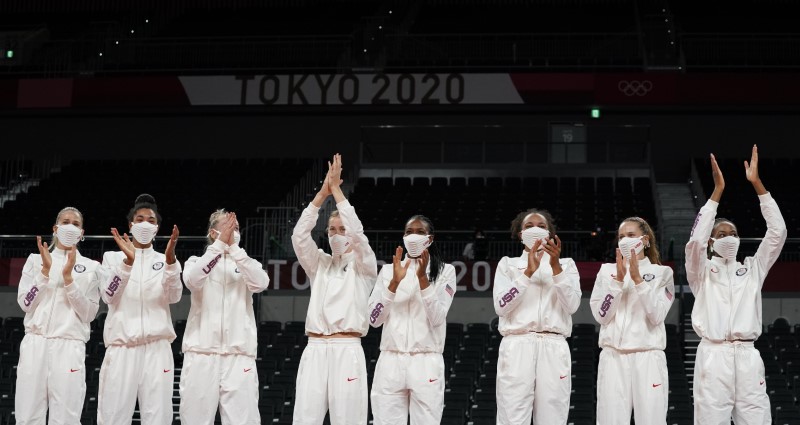 TOKYO, Aug 8 (Reuters) – A late surge put the United States at the top of the medals table on the final day as the Americans closed the book on the Tokyo Olympics.

The team had more than 100 medals heading into the final day but had to rely on Sunday winners — including their women’s basketball team which grabbed a seventh straight gold — to reach the top of the standings for the third Games in a row.

They won 39 golds — one more than rivals China — and 113 overall, a decline since the Rio Games, where they picked up 46 golds and 121 medals overall.

“We are thrilled by the performance of Team USA at the Tokyo Games –- and couldn’t be more proud of the way they carried themselves,” said Susanne Lyons, chair of the USOPC. “These Games are one for the history books.”

For some, the pursuit of Olympic glory took on greater complexity and meaning, as the Games carried on without fans under restrictive conditions amid the COVID-19 pandemic.

Simone Biles entered Tokyo eyeing a record haul of six gymnastics golds but instead changed the narrative away from winning medals to championing mental health, leaving an indelible mark on the Games and prompting conversation about the costly pressure to succeed.

Allyson Felix, who competed in her fifth and final Games after giving birth to a daughter via emergency C-section in 2018, got the sendoff worthy of her glittering career, picking up a record 11th medal as the most decorated woman in Olympic track and field history.

The American men struggled far more, getting just one individual athletics gold in the shot put and ending their drought on the track with a gold medal in the 4×400 metres relay on Saturday.

For some American fans, the competition was memorable because of who was absent — 100m sprinting star-on-the-rise Sha’Carri Richardson, who was suspended for cannabis use, prompting the White House to call for a review of the rules.

With the hugely successful Michael Phelps out of the pool and into the commentary booth, rising star Caeleb Dressel won three individual golds as the U.S. swimmers faced a fierce challenge from the Australians, who more than doubled their medal count in the sport since Rio.

The ‘Duel in the Pool’ between Katie Ledecky and Australian Ariarne Titmus generated thrills, as the American ceded her crown in the 200m and 400m. She proved untouchable in longer distances, however, winning the 800m and 1,500m.

(Reporting by Amy Tennery in Tokyo; editing by Clare Fallon)