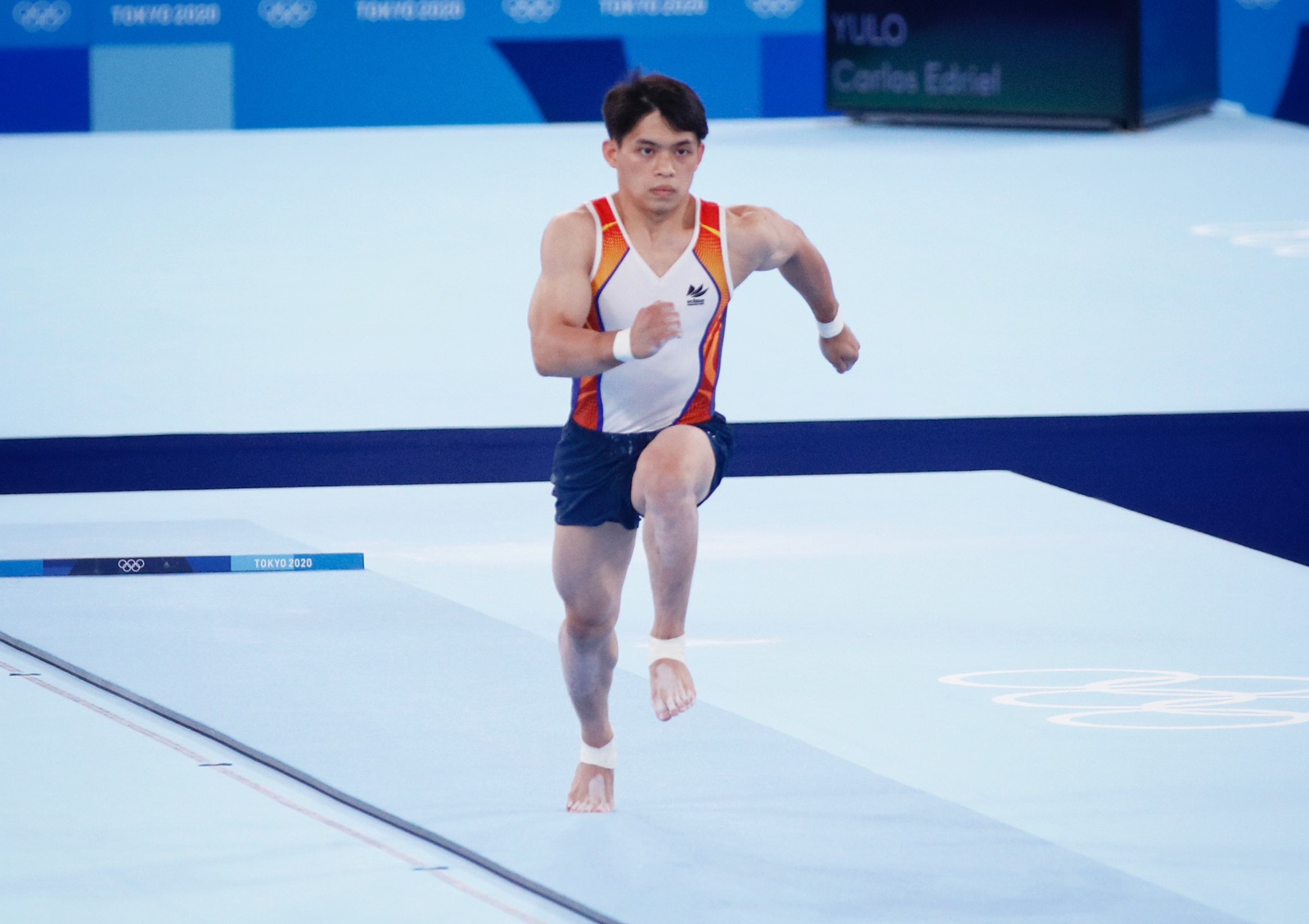 That was the story for Carlos Yulo on Monday night. He did everything right—except for well, sticking one landing. Just one.

Yulo seemed like the odd man out in the vault finals in the Tokyo Olympics. He was the underdog in a field bannered by the inimitable Jeahwan Shin of South Korea, veterans Dennis Abliazin and Nikita Nagornyy of the Russian Olympic Committee, and strong contender Arthur Davtyan of Armenia.

Yulo was also coming off a most disheartening performance during the qualification round, where he faltered in his pet event, the floor exercise, and looked nothing like the gymnastics wunderkind he had become over the past two years or so.

To put it bluntly, Yulo was the longest of long shots to win a medal in the vault finals, a situation he himself described as “unexpected.”

But lo and behold, the 21-year-old chiseled dynamo nearly vaulted into a podium finish.

The unassuming Manileño finished strong in his Summer Games debut, his average score of 14.716 just .017 points shy of the 14.733 posted by Davtyan, the bronze medal winner. Impressively, Yulo’s average wasn’t that far off from the identical 14.783 scores submitted by Shin and Abliazin, who won the top two prizes, the former getting the gold medal by submitting the highest single attempt score between them.

Yulo, who went last among the eight finalists, submitted a 5.60 start value or the relative difficulty of the routine in each of his two attempts, as previously mentioned by Gymnastics Association of the Philippines (GAP) president Cynthia Carrion.

Carrion was quite confident that Yulo would pull off an upset as long as he nails each of his landings.

The Malate-born gymnast was unable to stick his landing cleanly in his first attempt: A triple twist vault executed wonderfully except for the landing,  as Yulo stepped wide to the right and went out of bounds. That blunder earned him a -0.1 penalty.

Apparently, nerves got in the way of the young man again, as it did in the qualification round a week ago.

“Nakakakaba sa una,” said the ever-humble Yulo, who was all smiles nonetheless after the competition.

But this time around, Yulo did not completely cave in to the pressure, but rather rose above and beyond it. With a medal still within reach, Yulo executed a near-perfect Dragulesco in his second attempt, earning a 14.866 from the judges—the highest score in the entire contest.

But it wasn’t enough. Remember that faulty landing in his first attempt? The one that cost him a -0.1 penalty? That proved to be the littlest of margins in taking home a bronze medal.

Predictably, Yulo rued the close defeat. But in stark contrast to his disposition after his dismal showing in the preliminary round, the soft-spoken gravity-defier sounded more optimistic than dejected.

Indeed, Yulo can hold his head high. He more than held his own against the bests of the world, and he did so just nine days after a disappointing performance that made him cry his heart out.

That he nearly won a bronze medal outside of his pet event is a testament not only to Yulo’s world-class level but also to his ability to bounce back from adversity.

His strong finish, while not the ultimate goal, was validation for young Carlos Edriel Yulo, and a learning experience that will only make him better. After all, his athletic prime is still about to come.

Ever the optimist, he is now looking forward as he should. He vowed to make it back to the same grand stage in the 2024 Paris Olympics. Safe to assume, he can’t wait to land there.