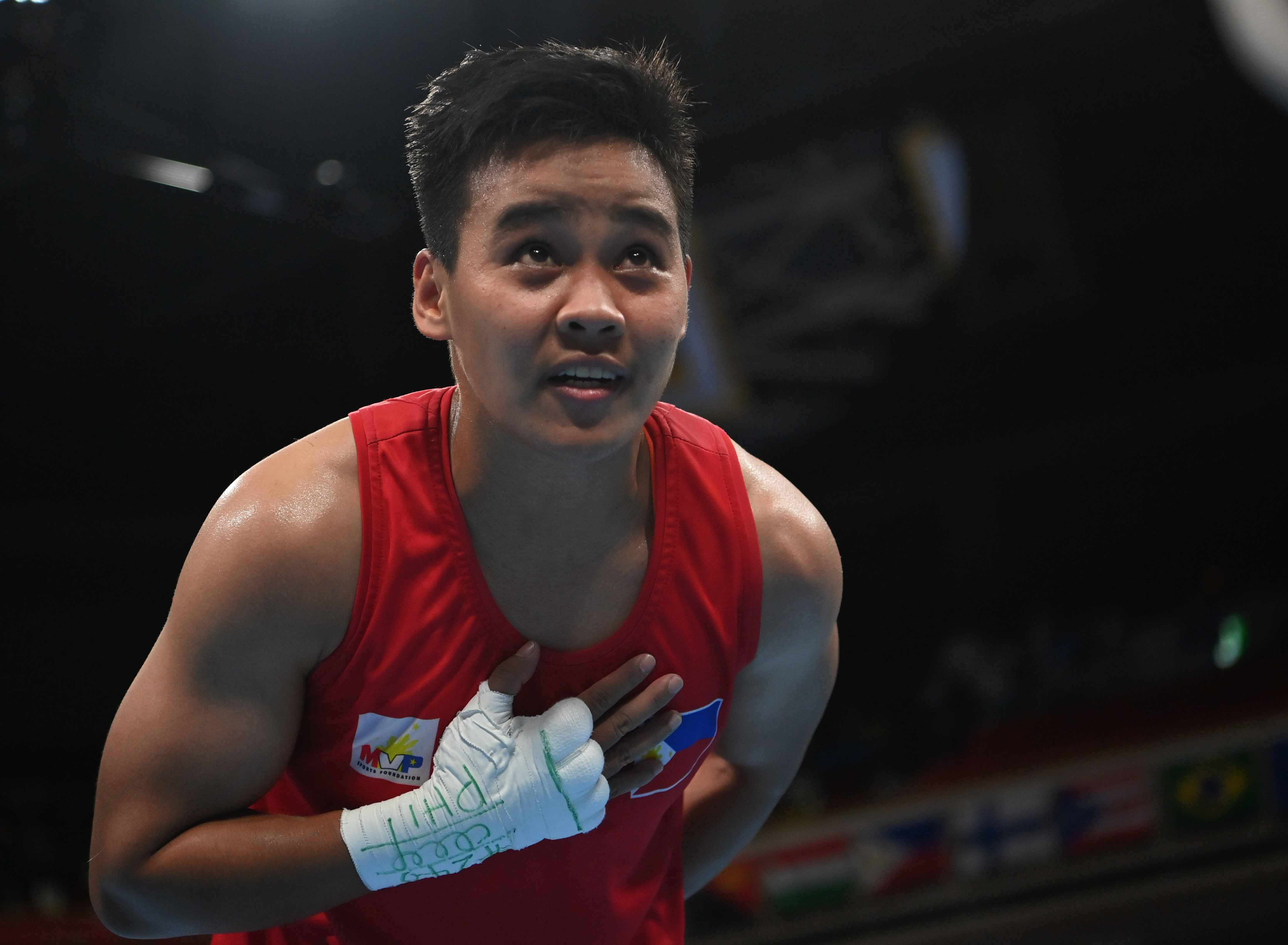 (August 4, 2021) – Nesthy Petecio hugged Sena Irie after the fight as if they’re old friends who haven’t seen each other in years.

It was only appropriate. After all, Irie hugged Petecio for most of their gold medal match in the Tokyo Olympics on Tuesday.

But there’s some truth that the two featherweight boxers have become acquaintances over the years. While they were surely not so happy to see each other at a mostly empty but still reverberating Ryogoku Kokugikan Arena, they were quite congenial after their fisticuff. As if they just didn’t try to rip each other’s heads off.

But such is boxing. Such is life.

It’s also true that Petecio and Irie haven’t seen each other for a while now. It’s their first meeting since the Asia/Oceania Olympic Qualification Tournament last March, where Irie also outclassed Petecio in the quarterfinals. Before that, it was Petecio who ousted Irie in the quarterfinals of the 2019 AIBA World Boxing Championships. Before that, Irie, in her debut, shocked Petecio in a tournament in Thailand.

That’s four times in three years that Petecio and Irie have exchanged blows. But in the aftermath of their latest rousing rendezvous, which the Filipina pugilist lost, they also exchanged smiles, hugs, and high-fives.

No one would blame Petecio if she sulked or got enraged. The unanimous decision was questionable, at the very least, especially after she won the second round. It’s also not farfetched to argue that the pride of Davao del Sur was the aggressor in the final salvo, with Irie reduced to her sly tactics of holding and embracing as if they’re performing kabuki, Japan’s traditional drama.

But Petecio embodied what the Summer Games is all about. Despite the gut-wrenching result, which could remind some Filipinos of the highway robbery on Onyok Velasco in the 1996 Atlanta Olympics—which curiously happened exactly 25 years ago to this day—Petecio was tender in defeat. While her loss wasn’t exactly as awful as Velasco’s, it was still equally painful. Yet she didn’t show it. At least not right away.

As the baritone-voiced announcer declared Irie the winner, Petecio just gave a slight shrug and grinned. She approached the very person who just crushed her dream and hugged her the way cherry blossoms embrace the sun in spring.

Petecio accepted it. She didn’t do enough. She didn’t get the coveted gold medal. Besides, no amount of protestations to the high heavens would reverse the result. No amount of complaining would persuade the judges to say “Sure, let’s start again.” She lost. Deal with it.

But if one turned on the TV late and saw the images of the 29-year-old Petecio smiling, pumping her fist, popping her red jersey to show the flag of the Philippines, one would think she was the winner. Petecio’s cheery facade, however, got painted over by melancholy during the awarding ceremony. She could only beam for so long. Perhaps replaying her mistakes in her head while standing on the podium with the silver medal, Petecio cried uncontrollably. A visage of almost-but-not-quite, so-near-yet-so-far, been-there-done-that.

Petecio absorbed yet another runner-up finish. It has happened to her before in the Southeast Asian (SEA) Games—thrice. She experienced the same in the 2015 Asian Championships and the 2014 World Championships. She was a poster girl for bridesmaid finishes. Until her breakthrough came in 2019, as she exorcised her blunders by winning the world title and later on, her first gold medal in the SEA Games, in front of her home country, no less.

That’s why heading to the Tokyo Olympics, she was touted to battle for the gold medal. Which she did, making geniuses out of the prognosticators.

But alas, she had to settle again for second place.

The records will show that she lost. But perhaps, what would be remembered by many in the years to come was the integrity Petecio displayed. Like Hidilyn Diaz, she served as the country’s envoy, her inspiring attitude in full display for the entire world—from Afghanistan to Zimbabwe—to see.

It has been the theme for the Philippines in this quadrennial event: All out, all class. Diaz waved excitedly even when she failed in her third snatch attempt. There’s Margielyn Didal, the Patron Saint of Photobombs. The ever-modest Carlos Yulo didn’t offer excuses. So did Kurt Barbosa, Cris Nievarez, Juvic Pagunsan, Elreen Ando, and Irish Magno.

Eumir Marcial and Carlo Paalam, two boxers still in the hunt for a gold medal, have started their postfight interviews heaping praises on their opponents. Paalam’s sportsmanship got even more pronounced after his foe in the quarterfinals, reigning gold medalist Shakhobidin Zoirov, walked off the ring without shaking hands.

Like Didal, Petecio has charmed Filipinos with her easygoing, fun, almost self-deprecating attitude. Quite adorably, recognizing her newfound popularity, she joined Twitter just a few days ago.

She also has a TikTok account, where she lip-syncs movie lines and video memes and dances to Andrew E. songs. It’s worth mentioning as well that Didal has a hilarious nickname for Petecio: “Sabaw.”

But on Tuesday, Petecio was nothing but a beacon of class for the Philippines. A quintessential embodiment of the Olympic core values of excellence, friendship, and respect. In a world increasingly fueled by hate, with racism, misogyny, and abuse still abound, Petecio’s virtue has stood out. The hard-swinging, wide-smiling, history-making vanguard showed that winning a silver medal can still be a golden moment.

As the awarding ceremony came to a close, Petecio once again congratulated Irie, whose surname means “blessed” in Japan. After all, while they’ve showered each other with punches several times already, they’re still kindred spirits—two women knocking out stereotypes while making immense sacrifices.

In competition, it sometimes helps to have a short memory. Forget about the loss, move on to the next. While another runner-up finish might still sting in the coming days, Petecio can take solace in the fact that her character captivated many. When she comes home, no doubt, she’ll be hugged by an adoring nation.