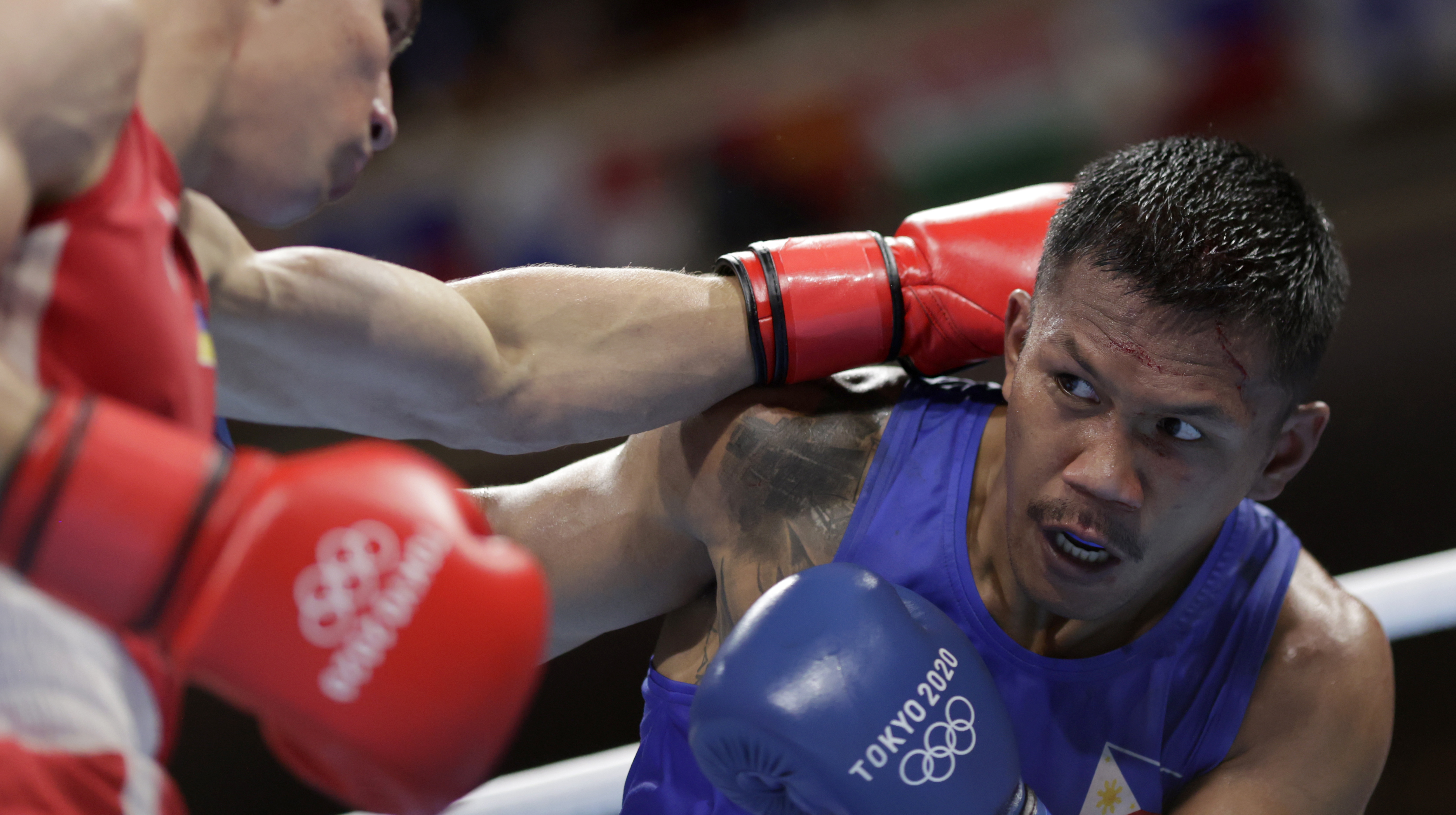 (August 5, 2021) – With every bit of exhaustion dripping from his battered armor, Eumir Marcial—his upper body stooped down and his right fist repeatedly tapping his chest—prayed as he anxiously awaited the decision.

It’s not preposterous to assume that more than 110 million Filipinos were praying with him, as every single tick of the clock added to the palpable suspense. But in the end, the joint invocations weren’t answered. Oleksandr Khyzhniak of Ukraine, whose face looked like a Quentin Tarantino movie, was announced the winner, escaping by the skin of his teeth, 3-2 in a split decision.

Marcial reverted to an upright position and pumped his left fist, the one he just used profusely for nine brutal minutes, in what could be viewed as either a gesture of defiance or acceptance. He then pointed his left index finger skyward, as if acknowledging the powers-up-there behind the painful result.

What has been a stunning stint in the Tokyo Olympics ended for Marcial on Thursday, losing in the middleweight semifinals as he saw his hopes for the gold medal slip away like a hapless leaf floating on a rampaging river.

Faith comes when reason ends. Amid the din and despair, Marcial was probably combing the cosmos for reasons. He gave his all, going punch for punch and dismissing all thoughts of social distancing with his formidable foe, who suffered a bloody nose bridge, in their epic slugfest. When the final bell forgivably rang, it looked like the 25-year-old Marcial did enough to get the nod of the judges. Apparently, he didn’t.

Khyzhniak, in a gargantuan sigh of relief, raised both his hands and screamed, his mouth as wide as the Black Sea, when he knew he was marching on to the gold medal match. He knew he survived a close one. Khyzhniak, whose name sounds like an imposing emperor from a bygone era, came, saw, and conquered. But not before Marcial gave him a scare. They fought to the hilt, both of them suffering cuts, gasping for air, and unwilling to submit to anguish. A visceral image of two gladiators fighting for honor.

Marcial narrowly won the first two rounds, delivering powerful blows to Khyzhniak. But he visibly ran out of steam in the final tango. He got tagged several times, his tired arms, bearing the weight of an entire archipelago, seemingly protesting against the perpetual punching.

The soft-spoken southpaw, who learned boxing from his father growing up in the tiny town of Lunzuran in Zamboanga City, failed to avenge his previous defeat to Khyzhniak. The hard-nosed pugilist from Ukraine, a former world champion, made Marcial throw in the towel in a tournament in Bulgaria in 2019 after suffering a shoulder injury. While he definitely didn’t quit on Thursday, Marcial absorbed another loss.

He also fell short in delivering his promise to win the gold medal for his oldest sibling, Elizer Marcial, who passed away last year after suddenly collapsing. He was 39 years old. Marcial, the youngest among five siblings, chose not to return home to continue his training in the United States in preparation for the Tokyo Olympics. It was a sacrifice he had to make, turning the personal loss into a primary motivation so he can help provide for his deceased brother’s six children.

He will come home with a personal vow unfulfilled, but no one can dare complain about his bronze medal. Not his late brother, for sure. His entire performance in the Tokyo Olympics, highlighted by a stunning knockout win in the quarterfinals, shouldn’t be defined by a single defeat. He heeded the call of the flag, a civic duty fueled by his unflinching fists—and he won’t hesitate to do it again.

It’s unclear what the future holds for Marcial, who turned professional last year. His stirring campaign in the Tokyo Olympics will surely entice promoters to offer him lucrative fights. But clearly, the road ahead is paved with optimism. He will be a fighter until hell freezes over. Wounded but willing, squashed but spirited, exhausted but exalted, he knows he left it all out on the ring.