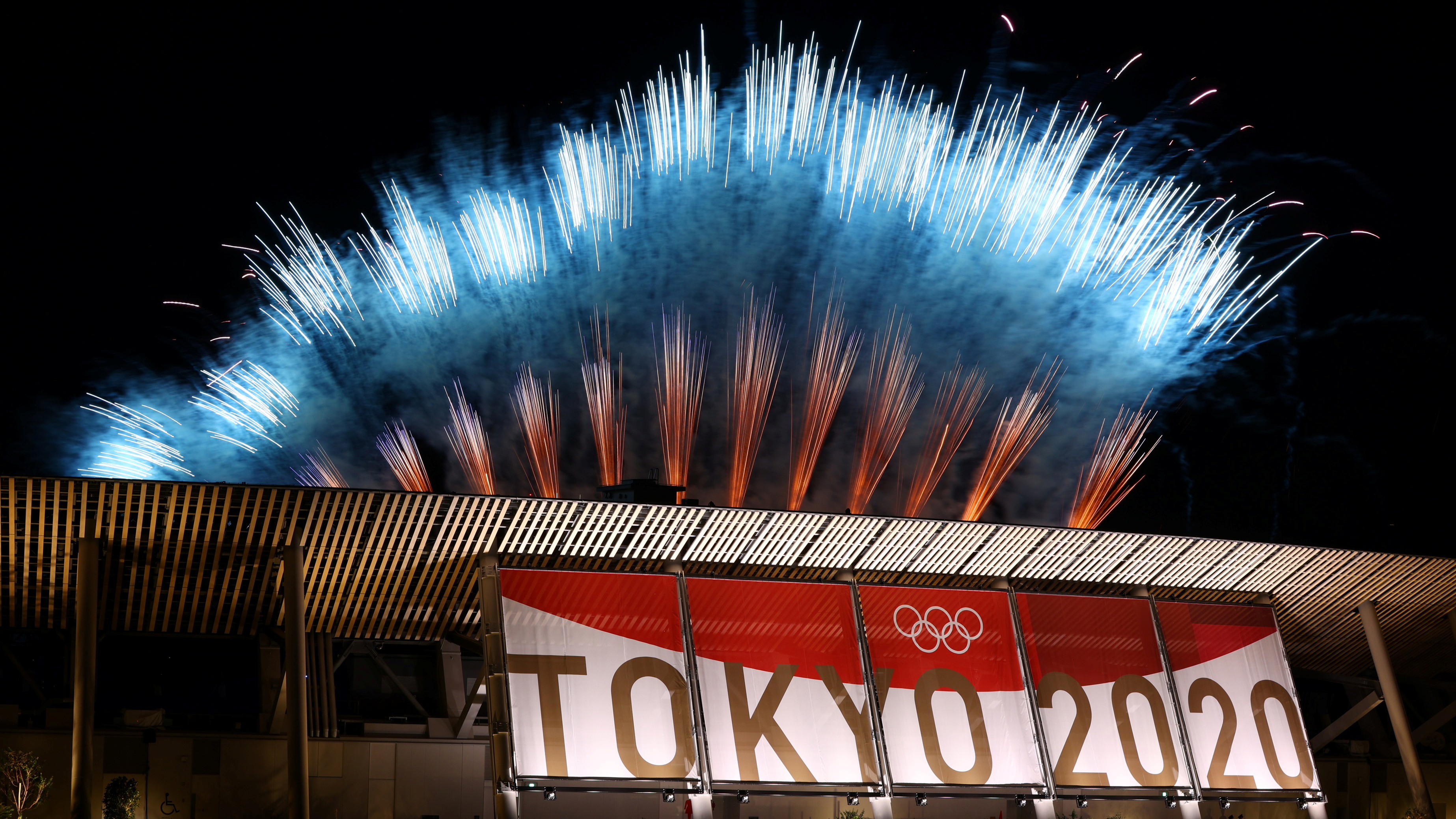 (August 8, 2021) – A most unusual of Olympiads has formally come to a close—after 16 days of intense competition, history-making firsts, breathtaking athletic achievements, powerful displays of sportsmanship, and inspiring feats of the unconquerable human spirit.

The closing ceremony, again held in a mostly empty Olympic Stadium, kicked off with four of Japan’s top athletes—Olympic champions, swimmer Yui Ohashi and judoka Naohisa Takato, gymnastics silver medalist Takeru Kitazano, and Youth Olympic Games breakdancing champion Ramu Kawai—carrying the Japanese flag. Also with them were Hiroyuki Yokota, a doctor, and Amane, a fashion model with a leg impairment. They handed over the flag to the Self Defense Forces for the Kimigayo, performed by the all-female Takarazuka Revue.

Next came one of the ceremony’s highlights: The traditional Parade of Flags, with boxing silver medalist Nesthy Petecio bringing out the Philippine flag and waving it proudly. Petecio was among the notable athletes chosen for the honor, along with wrestling bronze medalist Bajrang Punia of India, sailing gold medalist Mat Belcher of Australia, four-time javelin throw Olympian Kara Winger of the United States, and modern pentathlete Natalya Coyle of Ireland, among others.

The 29-year-old Petecio is one of four medalists from the Philippines in this edition of the Summer Games, marking the country’s best performance ever. Also garnering medals are weightlifter Hidilyn Diaz, and Petecio’s teammates Carlo Paalam and Eumir Marcial.

The Parade of Athletes soon followed, where over 5,000 athletes marched to centerstage without any distinction of their nationalities or regions. This tradition, which began in the 1956 Melbourne Olympics on the suggestion of a student named John Ian Wing, symbolizes unity, with the athletes coming out as one unified nation.

This Parade of Athletes, in contrast during the opening ceremony, was much more festive, with the athletes acting looser—dancing, celebrating, and taking pictures with one another. A light and fireworks spectacle next lit up the venue, before the Tokyo Ska Paradise Orchestra, popularly known in Japan as Skapara, filled the evening with upbeat music while various performers reenacted slices of daily life in Tokyo through dance.

The flag of Greece, the birthplace of the Olympics, was then raised alongside the Olympic and Japanese flag as “Hymn to Liberty,” Greece’s national anthem, played. It was followed by the final awarding ceremony of the Summer Games, where the winners of the marathon, considered the ultimate Olympic event, received their medals.

Legendary marathoner Eliud Kipchoge of Kenya won the gold medal in the men’s division, with Abdi Nageeye of the Netherlands and Bashir Abdi of Belgium completing the top three. Peres Jepchirchir and Brigid Kosgei of Kenya and Molly Seidel of the United States, meanwhile, took home the medals on the women’s side.

The new members of the International Olympic Committee (IOC) Athletes Commission were also introduced: Basketball star Pau Gasol of Spain, swimmer Federica Pellegrini of Italy, fencer Yuki Ota of Japan, and mountain biker Maja Martyna Włoszczowska of Poland. They will hold seven-year terms until the 2028 Los Angeles Olympics. They also gave tokens of appreciation to the 70,970 members and volunteers of the Tokyo Olympics, each of whom made the quadrennial event a success despite the uncertainties amid the COVID-19 pandemic.

As with the opening ceremony, a moment of reflection was held for the departed and those greatly affected by the global health crisis.

The night’s final highlight was the traditional and symbolic passing of the Olympic flag from the outgoing host to Paris, the host of the 2024 staging, with Tokyo mayor Yuriko Koike giving it to IOC president Thomas Bach, who then handed it to Paris mayor Anne Hidalgo.

In a first for the handover ceremony, France’s national anthem was played as part of a visually stunning prerecorded presentation, which then cut into a live feed of Paris, where thousands of citizens gathered in front of the Eiffel Tower to celebrate the hosting turnover.

Speeches from Tokyo Olympics Organizing Committee head Hashimoto Seiko and Bach, who highlighted the “unifying power of sports” and described this edition as the “Olympic Games of solidarity, hope, and faith,” concluded the proceedings. (PM)