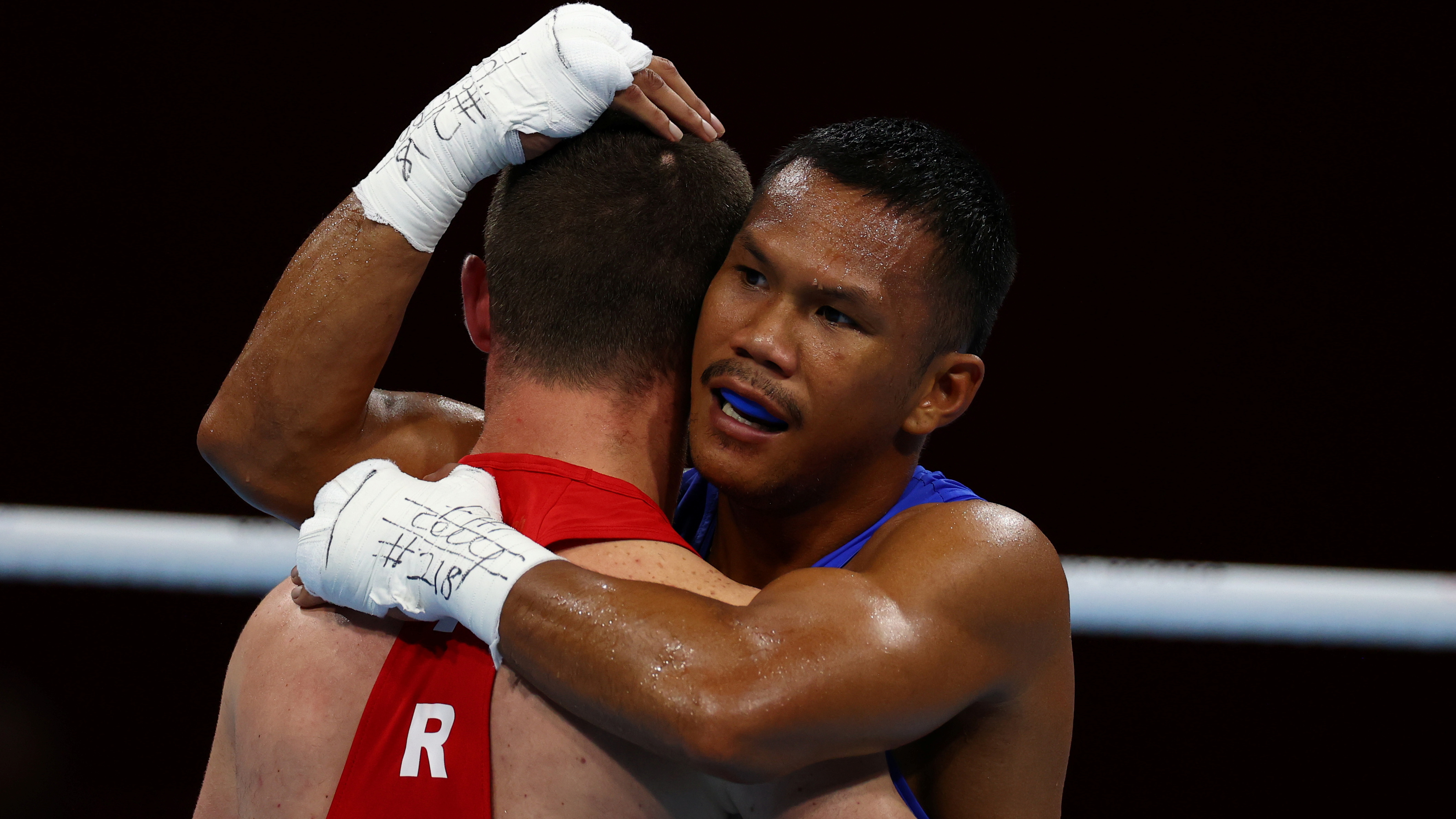 That was Eumir Marcial’s promise to his parents, Eulalio and Carmelita, as he embarked on his Olympic journey many months ago.

He kept his word—in emphatic fashion no less.

Marcial assured himself of at least a bronze medal in the Summer Games after knocking out Arman Darchinyan of Armenia in their middleweight quarterfinals showdown on Sunday. The 25-year-old Zamboangueño, who previously beat Darchinyan in the 2018 AIBA World Championships, was in control, stalking his foe from the opening bell and scoring a standing eight-count early.

The hard-hitting southpaw continued to pressure the Armenian, peppering him with hard shots to the body and head.  Then, in the final minute of round 1, Marcial caught his fellow professional with a three-punch combination, punctuated by a vicious right hook that landed flush on Darchinyan’s temple.

And just like that, in two minutes and 11 seconds, it was promised fulfilled for Marcial.

His parents though did not seem at all surprised. They were, in fact, a picture of calm as they watched their youngest dismantle a second world-class boxer in as many days.

That’s faith—in their son and God Almighty—that together, they will get things done.

“Nagpe-pray ako,” said Carmelita, when asked by News 5 why she looked so relaxed while watching her son compete. “Prayer is powerful.”

So are Marcial’s punches, like that devastating right knockout punch that sent Darchinyan to a deep, dark dimension.

No wonder the Marcial matriarch is firm in her belief that her son would keep his word and win a medal for their family and the country.

Eulalio, who was stoic as he watched the entire fight, along with other family members, relatives, and neighbors in their humble home in Brgy. Lunzuran, was just as sure. With the promise already fulfilled, the heads of the Marcial household are imploring the 25-year-old warrior to go for the gold medal and bring glory to the country.

They are also waiting eagerly for their son, who has rarely gone home since joining the national team at the age of 15.

All those years of being away from his family are finally paying off for Marcial, who is now hardened by training, adversity, and competition. He is just two wins away from becoming an Olympic champion, and a few weeks away from a much-deserved homecoming.

Marcial has always kept his parents as his primary motivation, especially his dad who first taught him the so-called Sweet Science. Through his winnings, Marcial has helped build a house for his family, purchase a nearby lot, and buy a car for his dad, which he promised to replace with a new one if he wins in the Tokyo Olympics.

Marcial will also be looking to fulfill another promise, but this time to his oldest sibling Eliver who passed away last October in Cavite after suddenly collapsing. He was 39 years old. The promise? To win the gold medal—nothing more, nothing less—just as Eliver wished for the night before he died.

Marcial will continue his fight on Thursday against former tormentor Oleksandr Khyzhniak of Ukraine. A win will turn the sure bronze medal into a guaranteed silver medal and more importantly, give Marcial the chance to go for the title.

Khyzhniak has had Marcial’s number, scoring a standing eight-count on his way to beating the Filipino fighter rather convincingly in the semifinals of the Strandja Tournament in Bulgaria in 2019.

But Marcial is better, smarter, and more polished now after training under the renowned Freddie Roach last year and at the United States Olympic Boxing Training Center in Colorado Springs in preparation for the Tokyo Olympics.

Winning the gold medal will be a daunting task, more so with Khyzhniak standing in Marcial’s way. But the hard-punching beacon of hope for the Marcial family has already fulfilled one promise. He will stop at nothing to fulfill another one. (PM)