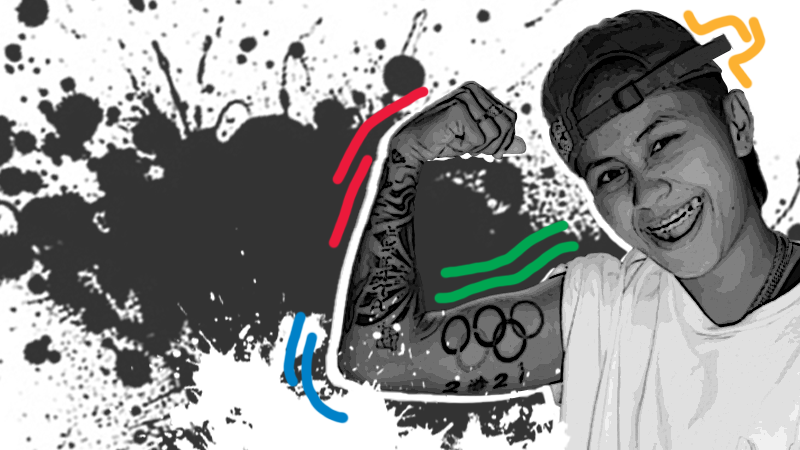 In just a few more days, a total of 80 skaters will make history in the Tokyo Olympics as skateboarding makes its debut as an official medal sport in the quadrennial event.

It has been a tumultuous journey for the sport to get to this moment, and at the forefront of the movement is Margielyn Didal. The energetic 22-year has undoubtedly become the face of skateboarding in the Philippines.

For years, there was a certain stigma when about skateboarding. There are still people who view skateboarders as “no-good” kids just looking to destroy property and cause trouble.

They have been branded as rebellious, lazy, and juvenile—and Didal was no exception. She was shooed away by security guards in her hometown of Cebu City, where she was discovered by an employee of a popular apparel brand. Even her own parents have dissuaded her from skateboarding.

But her fiery rise to prominence has given a huge boost to skateboarding’s quest for legitimacy. After announcing her arrival in style by becoming the first Filipina to compete in the prestigious X Games in Minnesota in 2018, she knew that the victory was not hers alone.

A few months later, she copped the gold medal in the 2018 Asian Games—the first person to do so—proudly wrapping herself with the Philippine flag as a slew of excited supporters cheering her on.

Undoubtedly, Didal’s triumph, coupled with her contagious charisma and seemingly boundless energy, helped the skateboarding community get the respect it deserved. She witnessed how Filipinos got more accepting of the skateboarding culture and slowly stopped stereotyping skateboarders.

Didal, who also won two gold medals in the 2019 Southeast Asian Games, will enter the Tokyo Olympics as the lone representative of the Philippines, or of entire Southeast Asia for that matter. While the pressure is heavier than her 5’2″ frame, she’ll push herself to further validate skateboarding globally.

“It’s going to be the big goal in my life to get that gold medal. That medal would be the Philippines’ first Olympic gold and would help cement skateboarding’s status as a serious sport in the country. I want to build a new generation of skaters for the future,” said Didal in an interview with Time Magazine.

Now, the fleet-footed firecracker gets to do her intricate tricks under the bright lights of the sport’s biggest stage. For Didal, it’s the culmination of a life-long path and the tallest task of her blossoming career.

But she is not fazed at all, because she knows that the entire country will be rooting for her. Yes, possibly even the security guards. (PM)