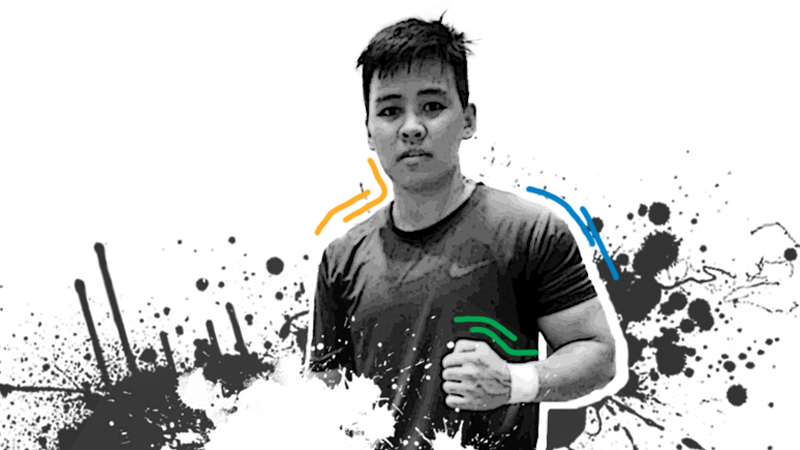 Her fighting spirit is even stronger.

In 2018, Petecio was thinking of quitting boxing, disheartened by a disappointing and disputed split decision defeat to China’s Yin Jun Hua in the semifinals of the Asian Games.

Quitting would have been the easy way out for Petecio, and no one would have blamed her. After all, she had previously endured three consecutive heartbreaks in the 2011, 2013, and 2015 Southeast Asian (SEA) Games, falling short of the gold medal every single time to settle for the runner-up finish. She also had an early exit in the 2014 Asian Games.

At that time, the pride of Davao City, seemed like the classic good-but-not-good-enough athlete, her string of defeats reinforcing the point. She was an excellent boxer but one who seemingly lacked what it takes to be a world champion—or even the region’s best.

In her athletic prime, Petecio was suddenly at a crossroads. She could either keep fighting or walk away from the ring as nothing more than a footnote.

Petecio chose the latter, even with self-doubt creeping in.

But it appears she made the right call, having found redemption in 2019, or just a year after contemplating retirement. Smarter, hungrier, and more focused, Petecio won the gold medal in the 57-kilogram category of the AIBA Women’s World Boxing Championships, becoming the country’s second female world champion after Josie Gabuco. Petecio ended the year with a bang, finally winning that elusive SEA Games gold medal in front of her fellow Filipinos.

Just as things were looking up, Petecio’s ascent would be derailed yet again, this time with a quarterfinal loss to Japan’s Sena Irie in the Asia-Oceania Olympic Qualifying Tournament in March 2020—as the tournament’s top seed, no less.

The 29-year-old Petecio, though, got a much-deserved break as the International Olympic Committee (IOC) scrapped the other qualifying tournaments due to the COVID-19 pandemic. Instead, the IOC handed out the remaining slots for the Tokyo Olympics to the highest-ranked fighters per continent. Petecio got the pass from Asia being the second-ranked featherweight.

Like most athletes, Petecio, has long dreamed to make it to the quadrennial meet.

“Athletes dream of this,” said Petecio in a story by Rappler. “The Olympics is the peak of our careers. For me, your career as an athlete is not complete until you play in the Olympics,”

That dream will be fulfilled soon, albeit amid strange circumstances. But Petecio could care less. She is focused on the here and has vowed not to let the fear of failure—something she knows full well—get in the way of her gold medal aspirations.

“(In the past), I allowed my worries and nerves to creep in,” said Petecio in Filipino in an interview on Noli Eala’s Power and Play. “Now, even if I hear something bad said about me or if I feel bad about myself, I do not allow those feelings to stay with me. I feel them but I forget about them so I can focus on my performance.”

For all the heartaches and heartbreaks, Petecio is about to complete her career as an athlete, and best believe that this lady who punches as strong as anyone will stop at nothing to add the most prestigious gold medal in her trophy case. (PM)