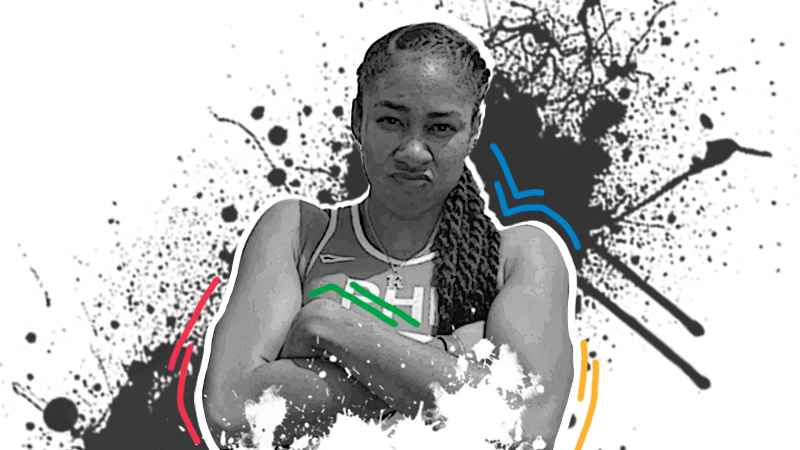 This was the national record set by Lydia De Vega-Mercado for the 100-meter dash—a feat that remained untouched for three decades. It seemed like one of those records that will stand the test of time in the history books.

Until Kristina Knott came along.

Knott, a Filipino-American sprinter who traces her roots to Imus, Cavite won the silver medal in the Drake Blue Oval Showcase last year by finishing 11.27 seconds in the 100-meter event, breaking the 33-year old record of De Vega-Mercado.

But this wasn’t the first time Knott shattered a record of De Vega-Mercado, regarded as Asia’s fastest woman in the 1980s. In the 2019 Southeast Asian (SEA) Games, Knott also set the new national yardstick in the 200-meter dash—twice in one day—en route to the gold medal.

Much like Knott’s emergence in the athletics scene, the beginning of her journey also came as a surprise. Growing up in Florida, it was basketball that captured most of her attention.

Having multiple sports disciplines was the norm in the Knott household, which is comprised entirely of athletes. Being the youngest of five siblings, KK as she is fondly called, drew inspiration from her older siblings and successfully juggled basketball and track. But after getting a taste of competition for both sports, her passion for running increased.

When the time came for Knott to choose which sport she’ll take and transition into a career, her desire to connect with her Filipino heritage played a huge role.

“I remember in college, my teammates are talking about representing their country and I’m like, you don’t have to represent America? And they said no, you can represent your mother’s country. I looked into it and thought it would be nice to represent my mom’s flag,” said Knott.

She was tapped to represent the country for the first time in the 2018 Asian Games. Her grand introduction, however, came a year later in the 2019 SEA Games, bagging two gold medals after also winning in the 4×100 mixed relay.

It was a series of unexpected events that led the 25-year-old Knott to her first trip to the Summer Games. In a few days, Knott and the rest of the 19-strong Filipino delegation in the Tokyo Olympics will be gunning to give the Philippines its very first gold medal.

Even the way she learned about her qualification in the quadrennial meet was unexpected, to say the least. The day before she found out she’ll be competing in the Tokyo Olympics, she tested positive for COVID-19.

Still, she remained confident that they will be fully ready for the prestigious competition. In an interview with ESPN 5, her coach Ro Griffin said it was just a minor setback and the situation didn’t affect their preparations.

Now that she’s made a full recovery, Knott is ready to give everything she’s got for the country.

The history books might need to be updated again. (PM)